1. External oblique type See figure (10a), external oblique type  swarfs breaking groove, front width, rear narrow, front deep and rear shallow.
The externally inclined swarfs breaker has large swarfs curling deformation, as shown in Figure 11, near the outer surface of the workpiece.
The cutting speed is the highest and the groove is narrow, the swarfs is first blocked and curled, and the curling radius is small and the deformation is large; At the tip B, the cutting speed is low and the groove width is wide, and the swarfs are finally curled with a large curl radius, which generates a force. The swarfs are turned over onto the flank or the surface to be machined, and are broken after collision to form C-shaped swarfs.
This form of swarfs breaker. In the medium depth of cut, the swarfs breaking range is wide, the swarfs breaking effect is stable and reliable, and it is widely used in production. The value of the inclination angle τ is mainly determined by the material of the workpiece. Generally, when cutting carbon steel, take τ=8°-10°.
When cutting alloy steel, to increase swarfs deformation, take τ = 10 ° - 15 °.
However, at large depths of cut, the swarfs is easily blocked due to the width of the swarfs breaker being too close to the outer surface A of the workpiece (see Figure 11). Even the swarf will damage the cutting edge, so generally use parallel. 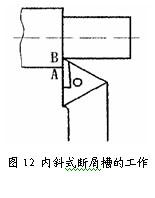 3. Internal oblique (see Figure 10c):
The inner inclined swarf breaker (see Figure 12) is the widest at the outer surface A of the workpiece. It is the narrowest at the tip B. Therefore, the swarfs are often curled into small rolls at B and rolled into large rolls at A. When the blade inclination angle of the main cutting edge is taken to be 3° to 5°, the swarfs are liable to form continuous long and tight swarfs s. The inclination angle of the inner inclined swarfs breaker and the main cutting edge is generally τ=8°-10°, The inner inclined swarfs breaker forms a very tight cutting range for the formation of long tight swarfs, so it is not as popular in the production as the outer oblique and parallel type, mainly for fine car or semi-finishing turning.
Share:
PREV：Relationship Between Chipbreaker Design And Cutting Edge Shape
NEXT：Metal Stamping Parts Mold Design And Production