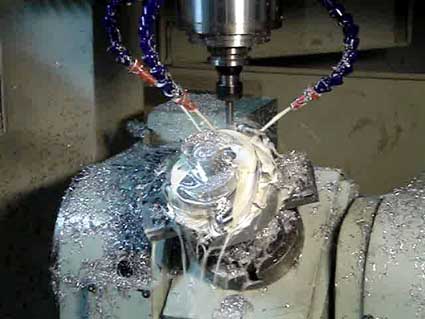 The first step to consider the process of a airfoil parts is the formulation of the process plan. According to the structural characteristics of the product, as well as the accuracy level and technical requirements, determine the most stable clamping method and the most reasonable processing method. Like the high-pressure buckets of combined cycle turbine assembly, it should be highest position of the back between the pitch between the radial inner surface of both side surfaces and the size, and the root and shroud. The clamping method adopts the most basic one clip and one top. However, in order to ensure the consistency of the process reference, the process boss and the center hole of the positioning are first processed in the vertical machining center, and then the entire airfoil parts is processed by the processed positioning reference. In order to ensure the accuracy of the two sides and the pitch, these parts are processed by the same precision milling cutter. And using the online measurement method, the two sides of the airfoil parts root or the leaf crown are first processed, and the two sides of the airfoil parts length are adjusted. Then, the adjusted inner length of the knife is used to machine the inner radial surface of the corresponding part to ensure the pitch requirement.

The entire process is arranged as follows:
1, On a five-axis vertical machine, one clamping. Firstly, the clamping process boss of the square steel is processed, and the central hole is used to process the central hole for positioning at both ends, thus fully ensuring the consistency of all process benchmarks;
2, Positioning on the five-axis machine tool by means of the process boss and the center hole, and tightening one end of the clamp at one end;
3, After the clamping is firm, the machining allowance of a large area is first removed as a whole;
4, The two sides of the tip end of the tailstock and the radially inner surface of the inner back are roughened, and then the two sides are finished with a fine milling cutter. Make an online measurement and compare it to the nominal size after the dose. Adjust the length of the knife accordingly, and then process until the two sides are aligned; then, with the final adjusted tool length, the inner surface of the inner side of the tailstock side is precisely milled;
5, Repeat the above steps and online measurement of the method of adjusting the length of the knife, making the two sides of the side of the quasi-drive end clamp, and the inner surface of the inner surface of the portion;
6, Then the rough milling surface and the transition of the two rounded corners, leaving a 0.5 to 1 MM margin on one side;
7, The root groove and the steam seal and the respective chamfers and process grooves are further divided into coarse and fine milling;
8, Rotary machining of fine milling surface, and two transfer; if the margin is large, you can also add one-step semi-finishing;
9, Finally, the top of the airfoil parts and the bottom of the airfoil parts root are milled, and the semicircular groove on the bottom surface of the airfoil parts root is drilled with a keyway cutter to finish processing all parts.

The original process plan was to process all the parts on a five-axis machine, regardless of roughing or finishing. The process boss is placed on the side of the crown, so when the clip is clamped, the crown is pressed at the clamp and the root is placed at the tip of the tailstock. A large number of vibration lines appear in the inner and back radial faces of the airfoil parts root thus processed. No matter how to adjust the processing parameters, the results are not ideal, and the longer the airfoil parts, the more severe the vibration pattern; Later, the process plan was changed to the process boss, which was placed at the root of the airfoil parts and the side of the crown was tight, which solved the problem of radial surface vibration. Another problem that bothers us is the processing of semi-circular grooves on the underside of the airfoil parts root. Because it is not perpendicular to the radial faces, it does not guarantee the tolerance of its left and right position, which wastes a lot of time and blanks. Finally, after communicating with the engineering staff, I had to put the semicircular groove on the three-axis equipment. 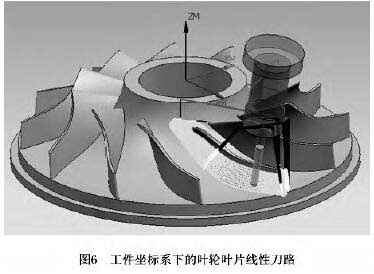