The airfoil typ parts has a wing-shaped section and a three-dimensional twisted space. It has a wide range of applications in axial flow turbo compressors, and its manufacturing has been generally carried out using a five-coordinate linkage CNC machine tool.

II. data preparation
The axial flow compressor airfoil parts in the turbomachinery and the TRT axial flow energy recovery expansion airfoil parts shape. The representation of the design pattern to the profile is usually the airfoil parts data of several sections, which may be a spatial lattice or a multi-segment arc. The data must be pre-processed. The main work content is smoothing, rotation, and translation, so that the design coordinate system is combined with the machine coordinate system, that is, the design reference and the processing reference are unified. The airfoil parts is processed by high-speed spiral cutting method, and the design of the airfoil parts profile smoothness and continuity is very high. The airfoil parts profile (back arc surface, inner arc surface, rounded corners of the inlet and outlet) must not have sharp points, vertices, and joints. Otherwise, under high-speed cutting conditions, the tool can easily generate large vibrations in an instant, causing equipment accidents. Another case where the leaf shape is not smooth is in the modeling process, although the profile of each section is a smooth continuous function curve. However, when forming a three-dimensional shape along the axis, the profile is not smooth, and there is a "wavy" undulation in the middle, which is usually corrected by adjusting the reference of each section.

In the case where the data in the same section cannot form a smooth spline, the original data must be modified. The specific method is to take n points on the section curve, take a point where the curvature is large, and take a point where the curvature is small, and make the normal of these points. As shown in Figure 2 and Figure 3. In Figure 3, the normal direction of each point of the smooth continuous curve changes gently. Figure 2. Cross-sectional curves formed by poor raw data. The normal direction of the different nodes changes drastically, and the section curve is obviously not smooth. If the three-dimensional space is generated by such a section curve, the airfoil parts profile is uneven and cannot be realized during processing. 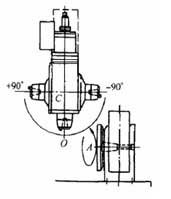 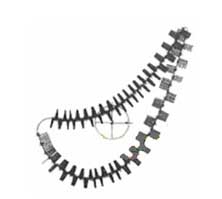 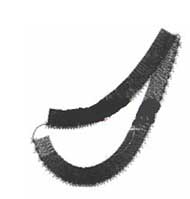 Based on the above, the first step of airfoil parts modeling is performed in a two-dimensional plane. Each section forms a closed curve in the plane, each curve having a fixed position in the length of the airfoil parts. Rotate each section first in a fixed position and then translate. The leaf shape of a airfoil parts generally has two forms: First, it consists of a spline curve, and the inlet and outlet sides have two arc transitions respectively; The second is a closed curve composed of multiple arcs. The following points must be noted when modeling.

2, Tool overcutting Calculation
There are two ways to avoid tool overcutting, ie changing the tool diameter or changing the cutting angle. For airfoil parts profiles with large curvature, overcutting is more likely to occur. For the convex surface machining, the overcut phenomenon is not easy to occur when the knife cluster is cut along the normal surface of the profile; For the concave curved surface, the cutter cluster is still cut along the surface normal, and the overcut is caused by the influence of the radius of curvature. In this case, the method of avoiding tool overcutting should preferably change the tool radius. Calculating tool diameter and cutting angle while modeling can greatly improve programming efficiency. As shown in Figure 5, the method is: On the closed airfoil parts profile curve that has been modeled, take n points evenly, and then at the first point, define an imaginary tool and an imaginary cutting angle. The tool is sequentially passed through each point on the section at a determined cutting angle in a sequential cycle, while observing whether there is an overcut phenomenon, and if so, modifying the tool diameter and the cutting angle. Since the cutting condition observed at this time is in a two-dimensional space, and only for a certain section, it does not reflect the actual three-dimensional processing, so further technical processing is required. That is, the adjacent two airfoil parts sections are projected in the same plane. If the section distance is larger than the tool diameter, the tool and the adjacent two airfoil parts sections are not overcut on the projection map, then the imaginary tool diameter and the cutting angle can be considered appropriate. In order to improve the cutting efficiency, a large diameter cutter is used as much as possible without overcutting.

4, Leaf extension and interception
In the usual case, in the design of the airfoil parts, only the list curve data of several sections is given. The actual leaf shape may be longer than the leaf shape determined by the given section, and may be shorter than it. If it is the first case, the leaf type should be extended. If it is the second case, the leaf type should be intercepted. Relatively speaking, the interception of the leaf type should be handled better. Simply use a flat or compound surface to intercept the airfoil parts at a specific location to obtain a new section, and use the data from the new section to form the desired leaf-shaped entity. For the extension of the leaf type, it is also necessary to perform a smoothing process on the leaf shape. The smoothness of the line method is only a plane curve, and the leaf shape is a space curve after extension. That is, the projection curves in two or three coordinate planes are respectively smoothed. In fact, it is generally only necessary to project the spatial curve onto two planes, and smooth the two plane curves obtained separately, and then synthesize the spatial curve (that is, three-dimensional processing as two-dimensional). Practice has proved that, in general, the projection curve of a spatial curve in each coordinate plane is smooth, and the spatial curve is also smooth. 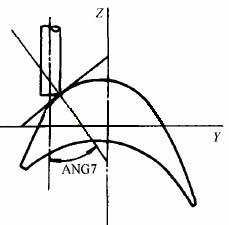 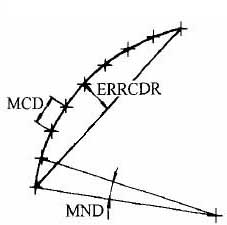 IV. Determination of cutting parameters
1, the parameters of the fit curve
When machining a blade profile, it is necessary to combine the motions of the three linear axes and the two rotary axes to achieve the desired trajectory of the contour.
In the actual calculation process, the three parameters shown in Figure 6 can be appropriately adjusted to meet the technical conditions of the blade.
MND is used to determine the angle at which the leaf shape error is controlled. Each section of the airfoil curve can be divided into an infinite number of segments, and the curvature can be considered to be the same in each segment. The numerical value of MND directly determines the density of two adjacent points during interpolation. The smaller the value of MND, the denser the adjacent two points, and the higher the accuracy of the processed leaf shape.
MCD is to control the linear distance between two adjacent points, and ERRCDR is to control the chord difference between two adjacent points. As with the MND values, different MCD and ERRCDR values determine different densities.

Among the cutting parameters, since the space surface is generally processed by the line cutting method, the line spacing and the step size must be calculated or determined.

Line spacing S
The size of the line spacing S is directly related to the height of the residual groove on the processed surface. When it is large, the surface roughness is large. However, the S selection is too small, although it can improve the processing precision and reduce the difficulty of repairing the clamp, but the procedure is lengthy, the machining time is doubled, and the efficiency is lowered. Therefore, the selection of the line spacing S should be just right.

Cutting angle
When using a face milling cutter to machine the airfoil, the selection of the angle between the bottom surface of the face milling cutter and the tangential direction of the cutting point of the blade profile is very important. If it is improper, it is easy to produce overcutting. Determining the cutting angle is usually done in the actual production. The specific method is to make a contour map of a certain section of the blade as shown in FIG. 5 by drawing. Then, n points are uniformly taken on the cross section, and one of the points is an imaginary cutting point, and an arbitrary cutting angle is determined empirically. And make a tool cross-section, and then use the loop statement to make the tool go through n points, and observe whether there is over-cutting. If so, adjust the cutting angle and repeat the above work until there is no overcut.

V. Tool path simulation
Computer simulation processing simulation shows that it can also indicate overcutting and residual conditions;
At the same time, after the parameters of the machine body are programmed, the actual machining state of the machine tool holder can also be displayed, and the interference can be checked to avoid accidents. 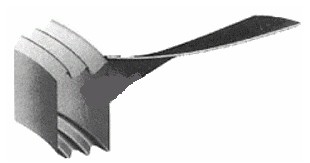 The processing of the leaf root is the same as the processing of the leaf type. It is usually divided into three parts: roughing and semi-finishing and finishing. In order to improve efficiency, roughing is usually carried out using a larger diameter die cutter, leaving only a margin of 0.2 mm for the root tooth profile. The main purpose of semi-finishing is to ensure that the finishing allowance is uniform, in addition to clearing the roots. According to the available data, a margin of 0.1 mm is reserved for finishing. Finishing is the most critical processing step. To improve efficiency and ensure surface roughness, the determination of cutting parameters is very important. In order to reduce the surface roughness value, finishing is usually performed in one direction. Although the one-way machining increases the idle travel of the tool and prolongs the machining time, the machining quality obtained by the one-way machining is guaranteed.
Share:
PREV：Application of five-axis high-speed machining center in automobile cover mould
NEXT：5-axis high-speed milling of aircraft fuselage parts