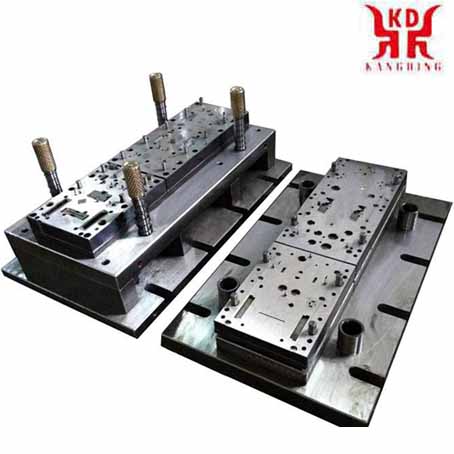 Stamping die is a special manufacturing equipment for processing materials (metal or non-metal) into parts (or semi-finished products) in cold stamping processing. Also called cold stamping die (commonly known as cold stamping die). Stamping is a pressure processing method that uses a mold installed on a press to apply pressure to the material at room temperature to cause separation or plastic deformation to obtain the required parts.

Mass-produced items are used in, for example, the automotive industry or housewares, etc. With the help of Stamping Die, a cost-effective and fast production of parts is guaranteed from a certain minimum quantity. Toolmaking mainly deals with the production of three-dimensional drawn and molded parts, but also two-dimensional cut parts (e.g. washers). The active elements consist of hardened, tempered tool steel, hard metal or ceramic, depending on the area of application. To increase the service life, the active elements are often coated (e.g. TiN, TiCN or AlCrN).

There are many forms of stamping dies, and stamping dies are also classified according to the nature of work, mold structure, and mold material.

Classification according to the nature of the process
a. Blanking die: A die that separates materials along a closed or open outline. Such as blanking die, punching die, cutting die, slitting die, trimming die, etc.
b. Bending mold: A mold for bending a sheet blank or other blanks along a straight line (bending line) to obtain a workpiece with a certain angle and shape.
c. Drawing die: It is a die for making the blank of a sheet into a hollow part with an opening, or to further change the shape and size of the hollow part.
d. Forming mold: It is a mold that directly replicates the blank or semi-finished workpiece according to the shape of the convex and concave molds, and the material itself only generates local plastic deformation. Such as bulging molds, necking molds, flaring molds, undulating forming molds, flanging molds, shaping molds, etc.
e. Riveting mold:   It is the use of external force to connect or overlap the participating parts in a certain order and manner to form a whole

Classification of product stamping processing methods
According to the different stamping processing methods of the product, the mold can be divided into: There are five categories: punching and shearing dies, bending dies, drawing dies, forming dies and compression dies.
a. Punching and shearing die: the work is done by shearing. Commonly used forms are shearing die, blanking die, punching die, trimming die, edge die, punching die and punching die.
b. Bending mold: It is the shape of bending the flat blank into an angle. Depending on the shape, precision and production volume of the parts, there are many different types of molds. Such as ordinary bending die, cam bending die, crimping die, arc bending die, bending punching die and twisting die, etc.
c. Drawing mold: The drawing mold is to make the flat blank into a seamless container with a bottom.
d. Forming mold: Refers to the use of various local deformation methods to change the shape of the embryo. Its forms include convex forming die, curling edge forming die, necking forming die, hole flange forming die, and round edge forming die.
e. Compression mold: It uses strong pressure to make the metal blank flow and deform into the desired shape. Its types include extrusion die, embossing die, embossing die, and end pressure die.

1. Crimping
Hemming is a stamping process in which the edge of the process part is rolled into a closed circle. The axis of the crimped circle is straight.

2. Curled edge
Crimping is a stamping process in which the upper edge of the hollow part is rolled into a closed circle.

3. Drawing
Drawing is a stamping process that transforms straight wool or process parts into a curved surface. The curved surface is mainly formed by the extension of the material at the bottom of the punch.

4. Pull bend
Stretch bending is a stamping process in which bending deformation is realized under the combined action of tensile force and bending moment, so that the entire bending cross section is subjected to tensile stress.

6. Leveling
Leveling is a stamping process to improve the flatness of partial or overall planar parts.

7, undulating shape
It is a stamping process that relies on the extension of the material to form partial depressions or protrusions in the process parts. The change of material thickness in the undulating forming is unintentional, that is, a small amount of change in thickness is formed naturally during the deformation process, and is not a requirement specified by the design.

8. Bending
Bending is a stamping process that uses pressure to produce plastic deformation of the material, thereby being bent into a shape with a certain curvature and a certain angle.

9. Chiseling
Chiseling is a process of blanking or punching with a sharp-edged chiseling die. There is no lower die for chiseling, only a flat plate is under the material, and most of the material to be punched is non-metal.

11. Blanking
Blanking is a stamping process that separates materials along a closed contour. The separated materials become workpieces or process pieces, most of which are flat.

20, reverse deep drawing
Reverse drawing is a drawing process in which the inner wall of the hollow process part is turned outward. 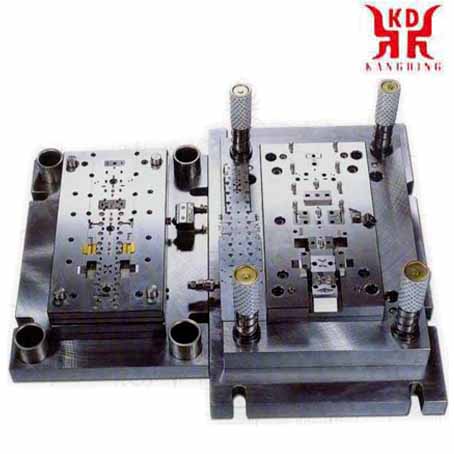 Depending on the type of construction, the following tool technologies can be distinguished:

Overall stamping
The cutting of several cutting lines on the same workpiece in one stroke is referred to as total cutting or complete cutting. Parts are produced that have an internal and external shape. The positional accuracy from the inside to the outside shape is better than with subsequent cutting.

Follow-up Stamping
Subsequent cutting refers to the cutting of several cutting lines on the same workpiece in several strokes. Parts are produced that have an internal and external shape. The positional accuracy of the inner to the outer shape is worse than with overall cutting.

Follow-up stamping compound
In the progressive stamping die, the sheet metal strip is cycled through the tool by the respective feed length until the last station is reached. The workpiece is then either separated from the so-called carrier strip (individualized) or wound up as an endless belt for the next work step. In addition to the follow-up cut, forming operations are also carried out in the follow-up group. Other processes such as thread forming or joining can also be integrated into the stamping die.

Combinations stamping
Combinations of progressive and transfer stamping tools are also possible. The part is first processed as a progressive composite part, separated and then transported to further steps by means of grippers.

Punching frames stamping die
The punching frames can be constructed differently depending on the stamping die technology. Suppliers of standard parts provide standardized and prefabricated stamping frames in various sizes and configurations.