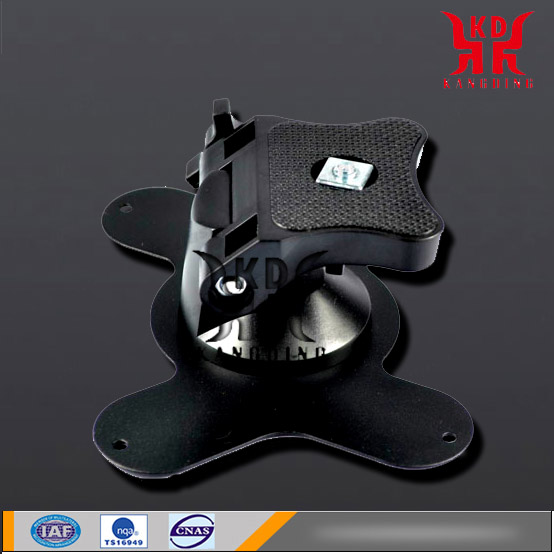 Chemical Surface Treatments is a general term for chemical or electrochemical treatments that generate a stable compound on the metal surface.
Separate or mixed use of acid solution, anodic dissolution (electrolysis) for rust removal. Phosphate treatment, chromate treatment, blackening, anodization, etc. create a protective film on the metal surface, all belong to chemical treatment.
The main process：Bluish and blackened, phosphorization, pickling, anodizing, electrochemical polishing, electroplating, electrophoresis, TD processing, QPQ processing, chemical oxidation, chemical surface treatment
Chemical treatment of metal parts: It mainly uses acid and alkali or alkaline solution to react with oxides and oils on the surface of metal workpieces. Dissolve it in an acidic or alkaline solution to remove oxidized scale and oil stains on the surface of the workpiece.

Bluish and blackened
Place metal parts into air-water vapor or chemicals to a suitable temperature to form a blue or black oxide film on the surface of the part. Also known as Bluish and blackened.
The oxide film formed on the surface of the black metal after “bluing” treatment, The outer layer is mainly triiron tetroxide and the inner layer is ferrous oxide.
In order to improve the rust resistance of metal parts, a strong oxidant is used to oxidize the surface of the part to a dense, smooth triiron tetroxide (Fe3O4). This Fe3O4 thin layer can effectively protect the interior of parts from oxidation. The Fe3O4 oxidized at high temperature (about 550 °C) is azure blue, also called blue treatment. Fe3O4 oxidized at a low temperature (about 130°C) appears black and is called blackening treatment. In the weapon industry, blue is commonly used; in industrial production, blackening is commonly used.

Phosphating
Phosphorization is a process in which metallic iron, zinc, aluminum, and aluminum alloys chemically react in an acidic phosphate solution to form a non-metallic or non-conducting conversion film.
The purpose of phosphating: Prevent metal from being eroded to provide protection; For The bottom of the paint, to improve the adhesion and corrosion resistance of paint film;
(1) Impregnation phosphating
Suitable for high, medium and low temperature phosphating Features: Simple equipment, only need to heat the tank and the corresponding heating equipment, it is best to use stainless steel or rubber lining the tank, Stainless steel heating tubes should be placed on both sides of the groove.

(2) Spray phosphating
Suitable for medium and low temperature phosphating process, can handle large area workpieces, such as car, refrigerator, washing machine shell.
Characteristics: The processing time is short, the film forming reaction speed is fast, and the production efficiency is high. The phosphating film obtained by this method is dense, uniform, thin, and has good corrosion resistance.

(3) Brush phosphating
When the above two methods cannot be implemented, the present method is used. The operation is performed at room temperature, easy brushing, rust removal, natural drying of the workpiece after phosphating, and good rust prevention performance, but the phosphating effect is inferior to the former two.

Plating
Electroplating is the process of plating a thin layer of metal or alloy on the surface of certain metals using the principle of electrolysis. Is the use of electrolysis to attach a layer of metal film on the surface of the metal
Role: To prevent metal oxidation (such as rust), improve wear resistance, electrical conductivity, reflective, anti-corrosion (copper sulfate, etc.) and Improve the appearance and other effects.
1. Copper plating:
The role of bottoming, to enhance the plating layer adhesion, and corrosion resistance. (Copper is easily oxidized. After oxidation, the green is no longer conductive, so the copper plating product must do copper protection)
2. Nickel plating:
The role of bottoming or improve the appearance, enhance the corrosion resistance and wear resistance, (Note that many electronic products, such as DIN heads and N-heads, no longer use nickel bottoming, mainly due to the magnetic properties of nickel that can affect the passive intermodulation within the electrical properties)
3. Gold Plating:
Improves conductive contact resistance and improves signal transmission. (The gold is the most stable and the most expensive.)
4. Palladium plating:
Improve the conductive contact resistance, improve signal transmission, and wear resistance is higher than gold.
5. Tin-plated lead:
to enhance the welding ability, quickly replaced by other alternatives (because most of the lead is now changed to bright tin plating and matte tin).
6. Silver Plating:
Improves conductive contact resistance and improves signal transmission. (Silver has the best performance, easy to oxidize, and also conducts electricity after oxidation)

Pickling
The use of an acid solution to remove scale and rust from steel surfaces is called pickling. It's a way to clean metal surfaces. Typically the pre-passivating treatment together.
The parts are generally immersed in an aqueous solution of sulfuric acid or the like to remove thin films such as oxides on the surface of the metal. It is the pre-treatment or intermediate treatment process of plating, enamel, rolling and other processes.

Anodizing
Anodizing: The electrochemical oxidation of a metal or alloy. A process in which aluminum and its alloys form an oxide film on an aluminum product (anode) under the influence of an applied current under a corresponding electrolyte and a specific process condition. This oxide film is protective, decorative and some other functional features. Anodization is usually anodization of sulfuric acid unless otherwise specified.
Anodizing process flow:
Mechanical Polishing - Degreasing - Washing - Chemical Polishing - Washing - Anodizing - Washing - Sealing - Mechanical Brightness
Anodizing has long been widely used in the industry. There are many ways to name different names and they can be summarized as follows:
Divided by current type:
DC anodizing, alternating current anodizing, and shortening the production time to the required thickness, the film layer is thick and uniform, and the pulse current anodization with significantly improved corrosion resistance.
Divided by electrolyte:
Sulfuric acid, oxalic acid, chromic acid, mixed acids, and anodized with natural coloring of organic sulfonic acid solutions.
According to the nature of the film layer:
ordinary film, hard film (thick film), porcelain film, bright modified layer, the barrier layer of the role of semiconductor and other anodizing.

Electrochemical polishing
Electrochemical polishing is also called electrolytic polishing. Electropolishing uses the workpiece as the anode and the insoluble metal as the cathode. The two electrodes are immersed in the electrolytic cell at the same time. Direct current is applied to produce selective anode dissolution, thereby increasing the brightness of the workpiece surface.

TD processing
TD coating treatment is a type of metal carbide coating that forms a layer of several micrometers to tens of micrometers by acting on the surface of the workpiece through high-temperature diffusion.
TD mold surface super-hardening treatment technology, using metal carbide diffusion coating TD (Thermal Diffusion Carbide Coating Process) principle,
The workpiece is placed in borax molten salt and its special medium at a certain processing temperature. The metal atoms in the special molten salt chemically react with the carbon and nitrogen atoms in the workpiece and spread on the surface of the workpiece to form a layer of several micrometers. To more than 20 microns of vanadium, niobium, chromium, titanium and other metal carbide layer. High workpiece wear resistance, bite resistance, corrosion resistance and other properties

Electrolysis
At the beginning of the cathode reaction, an electrolytic reaction produces hydrogen and hydroxide ions OH. This reaction causes the cathode surface to form a highly alkaline boundary layer. When cations and hydroxides react to form water-insoluble substances, Film deposition, the equation is: H2O → OH + H.
Electrophoresis
Swimming and migration) Cationic resin and H+ move to the cathode under the action of an electric field. The anion moves to the anode.
Electrodeposit
(separate out) on the surface of the workpiece being coated, cationic resin under the alkaline surface of the cathode, neutralization and separate out sediment , deposited on the coated workpiece.

QPQ processing
QPQ treatment refers to putting ferrous metal parts into two salt baths with different properties, and forming a complex penetrating layer through the penetration of various elements into the metal surface. The parts so as to achieve surface modification purposes.
It has not been quenched, but has reached the surface quenching effect, so called QPQ at home and abroad. The latest improved process is called photonitrification.
The advantage of this process over QPQ is that it does not deform at all, it has higher hardness, deeper depth, higher efficiency, no need for polishing, and high nitriding accuracy, and can be used for non-standard and large parts.
After QPQ treatment, the wear resistance is 16 times higher than that of conventional quenching and induction hardening, 9 times higher than carburizing and quenching of 20# steel, and more than 2 times higher than hard chromium plating and ion nitriding.
Share:
PREV：Mechanical Surface Treatment
NEXT：NONE